“Genuine inspiration is not particularly dramatic.  It’s very ordinary.  It comes from settling down in your environment and accepting situations as natural.  Out of that you begin to realize that you can dance with them.  So inspiration comes from acceptance rather than from having a sudden flash of good gimmick coming up in your mind.  Natural inspiration is simply having something somewhere that you can relate with, so it has a sense of stableness and solidity.  Inspiration has two parts: openness and clear vision, or in Sanskrit, shunyata and prajna.  Both are based on the notion of original mind, traditionally known as Buddha mind, which is blank, nonterritorial, noncompetitive, and open.”

The purpose of Dharma Art at Dzogchen Meditation Center is to discover the true nature of mind.  One’s True Nature refers to the nature of our mind when we are free from habitual reference point.  In the Dzogchen tradition of Tibetan Buddhism this is “knowing the one which liberates all.”

At Dzogchen Meditation Center we primarily use the Japanese contemplative (Zen) arts of Shodo (brush calligraphy) and Kyudo (Archery) as the vehicles for exploring Dharma Art practice. 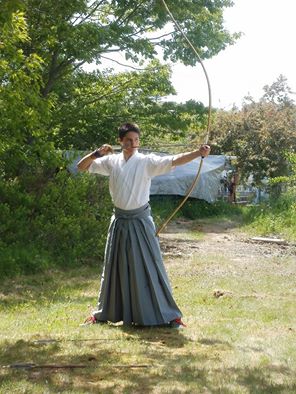 The key to understanding Dharma Art is found in the teachings on Isshin and Zanshin.  Isshin means “one mind/heart” and Zanshin means “remaining or left-over heart/mind.”  These terms are really identical in meaning to shamatha and vipashyana in our Dzogchen meditation training.

Isshin refers to doing something with synchronized body and mind.  This is the practice of “being one.” Within the context of practicing a Dharma Art like Kyudo we study the 7 step process of shooting the Japanese Bow.  These 7 steps are very precise movements which also are completely practical and efficient.  After repeating these movements and with the corrections of an experienced Kyudo teacher we learn the physical technique of shooting the bow.  The main point of learning this way of shooting is to bring the mind to one-pointed awareness and precision in the shooting.  Body and mind are synchronized and this synchronization cuts the habitual tendency to follow errant thoughts and dwell in a fantasy world while shooting.

The completion of the shot occurs at the 6th and 7th step in the shooting process.  First the bow is held at full draw for about 7 seconds while the power of the shot and the presence felt by the shooter builds in intensity.  With the release there is a powerful yell (kiai) which cuts through any conceptual overlay on what we are doing.  After the shot the archer stands with arms outstretched for a moment with complete composure.  The build up of synchronizing body and mind is isshin – the development of a mindful state.  At the arrows release there is a moment of complete cutting through and lack of any manipulation.  In the Zen tradition this is known as "kensho."  In Dzogchen we call it Rigpa -- awareness which is stripped bare of any habitual reference point.  Kyudo -- Zen  Archery-- is the perfect art for developing one’s recognition of nonconceptual awareness.  Kyudo training at DMC is not open to the general public.  If you are interested in exploring this practice form -- please call the head instructor, Tashi Armstrong to schedule private interview.  In general, this training is only open to full-time residents in training at Dzogchen Meditation Center  Tashi can be reached at the DMC main phone number (207) 607-3392

The Secret of the Target in Shambhala Kyudo
by Tashi Armstrong-- Head Instructor
The secret is that the target in kyudo
has no reference to a self
which is the view.
This realization is called "a clear
Reflection of your shooting."
Like trying to polish a tile
There was never anything to clean
or clear away
Seeing clearly is Basic Goodness
Basic Sanity
The practice of composure allows for this recognition which is the practice
Neither leading nor following
Everything that arises in experience is self-existing
which is called "Conduct"
Zanshin expands including all you experience
This is the blessing of the lineage,
Sacred World,
Outer, Inner and Secret Drala is
Simply the awareness that is left
When pre-occupation falls away
which reverberates endlessly

The Dzogchen Meditation Center
4 Armstrong Way
West Bath, ME 04530
Phone:
207-607-3392
Email:
This email address is being protected from spambots. You need JavaScript enabled to view it.@dzogchenmeditation.com