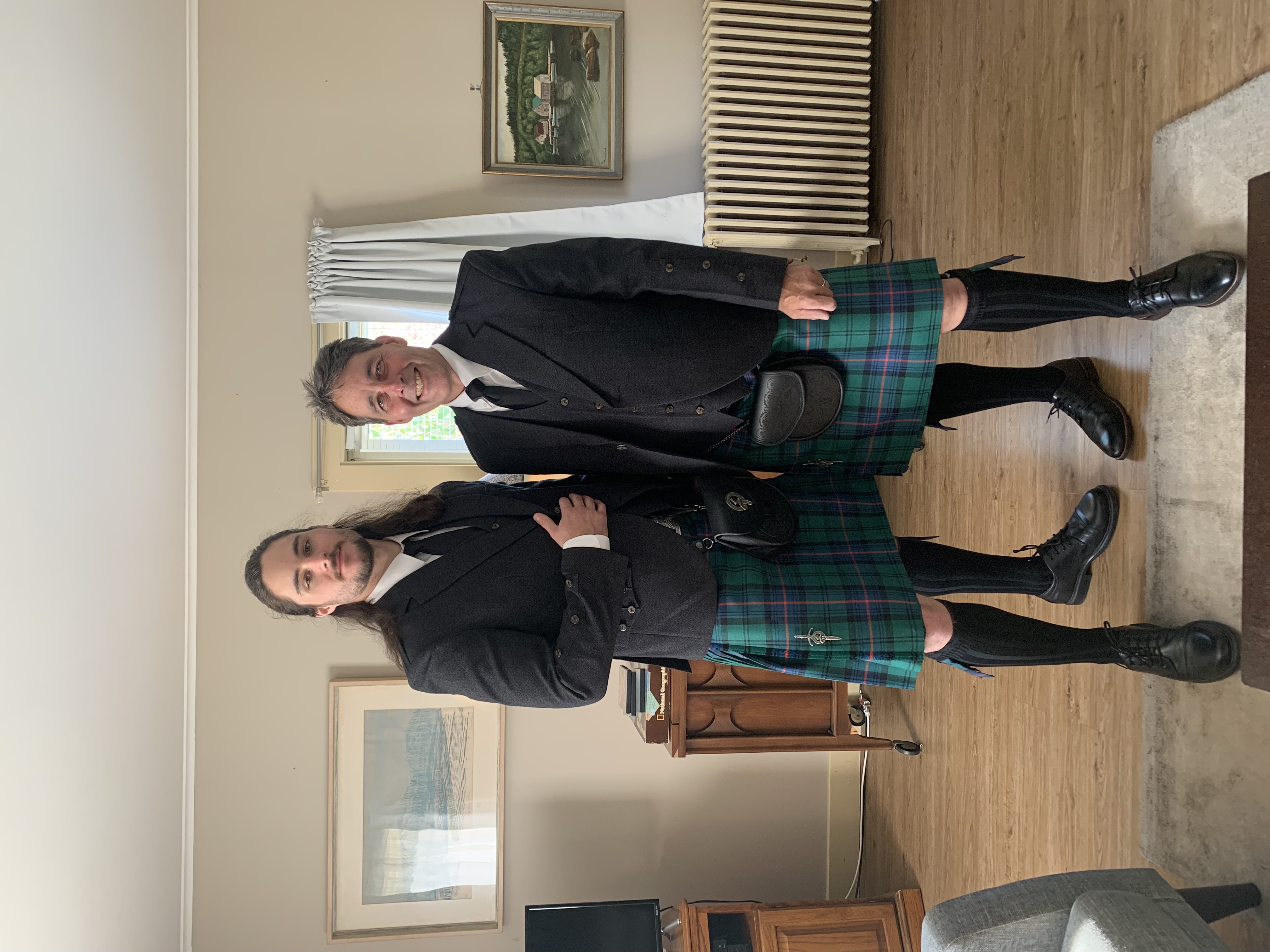 from Burns Night: My Supper With Rabbie

And there's a hand, my trusty fiere!
And gie's a hand o' thine!
And we'll tak' a right guid-willie waught,
For auld lang syne.

The annual celebratory tribute to the life, works and spirit of the great Scottish poet, Robert Burns (1759-1796). Celebrated on, or about, the Bard's birthday, January 25th, Burns Suppers range from stentoriously formal gatherings of esthetes and scholars to uproariously informal rave-ups of drunkards and louts. Most Burns Suppers fall in the middle of this range, and adhere, more or less, to some sort of time honoured form which includes the eating of a traditional Scottish meal, the drinking of Scotch whisky, and the recitation of works by, about, and in the spirit of the Bard.

Every Burns Supper has its own special form and flavour, though there are probably more similarities than differences among these gastro-literary affairs. Individual tastes and talents will determine the character of your Burns Supper. Some celebrants may contribute the composition of original songs or poems; some may excel at giving toasts or reciting verse; while others may be captivating storytellers. A particular group of celebrants will, over time, develop a unique group character which will distinguish their Burns Supper celebration from every other.Our core group has been meeting for 14 years. We started off on a whim, without any notion of traditional form, other than the idea that we would eat haggis, read Burns, and drink whisky (not necessarily in that order). An itinerary evolved that has lots of traditional elements, but leaves room for personal or topical additions. Feel free to add a few unique conventions of your own.With a little bit of planning anyone (well, almost anyone) can enjoy a Burns Night celebration. All that's needed is a place to gather (gracious host), plenty of haggis and neeps to go around (splendid chef), a master of ceremonies (foolhardy chairman), friendly celebrants (you and your drouthy cronies), and good Scotch drink to keep you warm (BYOB). With these ingredients, at least a few celebrants will be able to make prattling fools of themselves, trying to do justice to the words and spirit of Robert Burns. And if everyone brings along a wee dram and a bit of poetry, prose or song then each, in turn, may become an object of mirth and amusement to the gathered throng. Be prepared to enjoy yourself beyond all expectation. With good cheer and gay company we all may, in short, be able to ring in the Bard's birthday fou rarely.I've found that most people, although they may be unaware of it, love to attend Burns Suppers. They may feel a little intimidated at the idea of attending a participatory event, but are attracted by the idea of a ribald literary soiree. (They may perceive a Burns Supper to be some sort of droll intellectual exercise - it has hip cachet and doesn't sound too threatening.) These people are often wonderfully appreciative guests and end up having a great time. And therein lies a dilemma for all Burns Supper organizers: Motivating guests to be active participants, rather than passive appreciators. Everyone should feel comfortable taking part with verse, anecdote or song, but they may need a little help and encouragement. So as a Burns Supper chairman it is highly recommended that you come prepared with plenty of literary ammunition with which to arm any unprepared, or reluctant, celebrants. It helps if you know your guests and can match them with a suitable reading. Better still, you may be able to gently motivate them, in advance, by including an informal listing of sources along with your charming (I'm sure) Burns Supper invitation. Hopefully that, along with the good vibes and good whisky, will be all the encouragement anyone will need to lower their inhibitions to a level that Burns, himself, would appreciate.